The men and women who proudly serve in the United States military not only protect our country but are also improving their educational levels with their selfless and brave service. While military service is challenging, difficult, and might not be for everyone, if a person has what it takes to make an honest commitment to defending America there are rewards that go along with that. While some people automatically dismiss the idea of joining the military, one should be aware of the assistance in attaining educational goals that the military helps provide. Besides helping to install discipline, learning a skill, and getting the recruit into fabulous shape, up to 100% of college tuition can be paid for as a result of your service.

As most high school seniors can attest to, military recruiters frequently make themselves available to discuss careers opportunities in the armed forces to the 17 to 25 year old age bracket. A recruiter can provide you with much more detailed information than can be learned here, and let you know if you are eligible to join or not, but knowing the basics before you speak with them is critical. There are two very different ways to serve your county while getting your college paid for.

The first is to enlist for a period of two to six years as what is commonly known as a private, although in the navy you will be known as a seaman. By enlisting you are starting out at the lowest possible rank, an E-1, and your pay and lack of authority reflect that. Before you enlist it is critical to score as high a score on the ASVAB test as you can since that will allow you to apply for more military jobs, and to get yourself into great physical shape.

You will then spend an average of three months in basic training where you learn important information critical to your branch, participating in daily physical training, having military culture & discipline installed in you, and master basic weapons handling skills. Contrary to Hollywood portrayals of boot camp as a hellish experience depicted in films such as Full Metal Jacket, physical violence is not allowed nor tolerated there today. The modern military wants smart, intelligent, responsible people, and has learned physical violence is not the best way to bring that out in brand new recruits. While boot camp will not be easy, the good news here is that upon completing basic training you have already earned college credits from most universities. Typically, most colleges will offer you several credits of physical education or elective credit upon offering documentation that you completed basic training.

After basic training the next step is going to a specialized school where you will learn your military job, or Military Occupation Specialty. This is what you will doing day in and day out each day while in your branch of service, so it is important to choose this carefully with your recruiter. Obviously, you want to pick something that you will both enjoy and where you can learn marketable skills with. This is an opportunity to get an early jump on college while still serving, as many military jobs such as the medical field, military police, translation, electronics, etc. have civilian counterparts. These schools also offer more opportunity to earn college credit, sometimes in rare subjects.

While on active duty, there are often opportunities to start college and knock out a few credits per semester. Unless you are a combat arms profession, such as infantry, armor, special forces, or artillery, more often than not you will spend a fair amount of time on a base or ship and sleep in a bed or cot at night. This allows you the opportunity to take college classes thru your military branch that are offered on base during your free time. While most of these classes are in the 100 to 200 level range, a focused individual can complete their first year or two of college while serving. The Community College of the Air Force is well known for this and even grants full-accredited associates degrees. If you are in the Navy stationed aboard a ship the classes are often given either online or thru distance learning via video.

Upon completing your military service you are now eligible to take advantage of your educational benefits providing that you have been honorably discharged. These benefit packages include the post 9/11 GI Bill, Montgomery GI Bill, and Veterans Education Assistance Program. It is critical that the potential recruit sign up for these programs before they enlist, as a small amount of money is deducted from your paycheck each month to qualify you. The investment is well worth it though, as the amount of educational assistance far exceeds the paycheck deduction. The GI bill in particular pays for up to four years of college expenses, and can cover up to 100% of all tuition along with relocation expenses and money for books and supplies. It can even be transferred to another family member if you elect not to attend college but want to ensure your spouse or children do. The GI Bill is perhaps the most generous benefit offered to former service personnel, and should be taken advantage of as it is essentially free money for the taking. 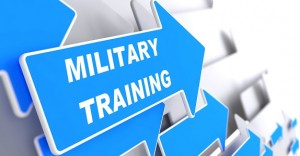 Sometimes the thought of going away from home for years can be a deal breaker to enlistment, which is completely understandable given that no one wants to be away from their family or the place where they grew up. A possible solution in this situation is to join the National Guard or Reserves. With this option, you still are considered part of the military, but after your initial training will typically only be required to participate for one weekend a month and two weeks a year. Essentially, this is a way to be involved with the military and enjoy the benefits it provides on a part-time basis. Since your commitment to the military is not as great as it would be if you were active duty, the assistance for college has been reflected in this regards as well. However, there is still help available that your recruiter can let you know about.

The second way to pay for college while serving your country is thru an ROTC program. ROTC allows a person to attend college first, and then go into the military at an officer level rank where there is greater pay and responsibility. ROTC is a program offered on many college campuses where a student takes military science classes, participates in military drill, and takes part in field training exercises while attending regular college classes at the same time. Upon completion of the program and graduation with a bachelor’s degree, a commission as an officer at the rank of 2nd Lt. is awarded. You must then commit to serving for not less than three years in the military. Typically, many cadets enrolled in ROTC are on scholarship, where the military pays for the cost of tuition, books, fees, and provides a small amount of spending money. ROTC scholarships are very competitive, as the military only wants the best and brightest as future leaders. Scholarships range in duration from four to two years, and are awarded based on GPA, leadership skills, physical fitness, and individual potential.

The United States needs a strong and dedicated military to keep our country safe, and good men and women to be a part of that. Helping to not only defend our nation but also pay for college is something that everyone should explore, as the military provides an amazing level of college assistance.

After graduating with a degree in Communication Studies from San Jose State University, Bryce has worked in sales and marketing. With nearly a decade of business development expertise under his belt in the education industry, he now operates AcceptanceRate.com to help future students get reliable data in the palm of their hands easily and effectively.

A staple of all large cities and almost all counties in the United States, the…

College sports are a big business, bringing in over a billion dollars per year for…

In 2014, University of California at Berkeley received the highest number of freshman applications in…

Each university is ranked each year by various ranking entities.  Some of the most common…

After deciding on what you hope to gain with your university degree, you can begin…

Supply and Demand: Economics Behind Admissions

Search admissions and acceptance rate information on over 1,500 colleges and universities in the U.S.