Supply and Demand: Economics Behind Admissions

Known as the dismal science because it is rarely agreed upon even by experts in its field, Economics plays a huge part in the business of higher education. For all its vaulted glory as an ivory tower where ideas flow freely, young people discover who they are, and critical research is conducted, at the end of the day a college or university must remain profitable in order to stay open. Since students are such a large part of a university’s income, who is allowed into programs is surprisingly enough a matter of cold, factual, economics. The good news is that once you understand this there are things that can be done to improve your chances for admission.

As the school days dragged on during your senior year of high school while you were already making summer plans, I’m sure many people were forced to sit thru an economics class where the teacher droned on about supply and demand. While you may have been unlucky enough to have the monotone economics teacher Ben Stein so aptly shown in Ferris Bueller's Day Off, the lessons taught bear repeating in the context of university admissions.

You may have asked yourself why some people get to drive BMW’s to work while others in this world are taking the bus everywhere. The answer lies in something known as supply and demand, which can best be thought of as how much of something there is available that day and how many people want it. Due to its sleek design, reputation for quality, and driving comfort, lots of people would like to own a BMW’s, so demand is high. Since producing such an admirable vehicle takes a great deal of time, engineering, and labor, there are a limited number of such cars created each year. It’s not like producing soda pop where giant vats of sugar are mixed with water and sealed in a can with a colorful logo on it. Unfortunately, as anyone who has ever stepped foot on a high-end car lot will tell you, the price of a BMW can easily equal an entire year’s income for most people. Hence, the number of people who own such a luxury car are few and far between. 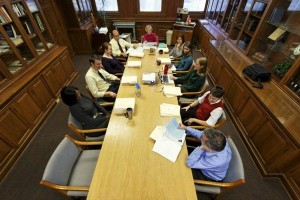 With some variables, the same basic concept applies in university admissions as the more prestigious or high-end the University, the more potential students that will apply to it. Drowning in applicants, a university now has the luxury of picking and choosing who gets to pass thru the golden gates into the promise land. This number can be very low indeed regarding an Ivy-league school, where admission percentages hover around the single digit. While it seems anathema to the idea of education, it is almost a point of pride among several universities that they have a high rejection or waitlist rate.

Van Linn found this out the hard way. She is proud to say that she is a graduate of Purdue University, and her degree has opened doors that would have previously been closed. Often, she can get interviews simply on the strength of her degree and well-organized alumni network. Getting into her dream school however, required an almost perfect SAT score, endless nights studying, and, in her own words “a ridiculous amount of extra-curricular activities”. All of her extra effort paid off though, as she was finally admitted after a year-long odyssey of attempting to get in.

Not so coincidentally, these universities are also going to place the applicant into perpetual debt slavery for the rest of their lives as expenses can easily run into six figures for an undergraduate degree. Yale University’s website prices the basic expenses of tuition and on-campus housing (not including transportation, dates, clothes, snacks, and other traditional college monetary needs) for a bachelor’s degree at over a quarter of a million dollars. This number is sure to increase as time goes on. Potential students must do some soul searching to determine if such an expense is going to be a worthwhile investment in their future.

Looking to save money on college is a worthy endeavor, but individuals should be wary of cutting costs too much. The University of Phoenix tends to take all comers and the perception has grown, rightly or wrongly, to some that it is little more than a diploma mill with slick advertising. While tuition is much lower than alternatives, many hiring managers disregard degrees from disreputable institutions. This may mean that the time, money, and energy invested in an education provides one with limited benefits. In short, one has to balance out their budget with the doors that getting a degree will open.

The more reputable a university means fewer students admitted on a sheer number basis, but there are several things an applicant can do to increase their odds of admission with some information in mind. The first is that since less students are admitted on a per-capita basis, an institution must extract more money from those that do make the cut. Besides tuition, colleges today look at the potential future earning power of students. In short, they are looking to see how much money you can provide them in the future after you graduate. With the assistance of powerful alumni associations and their ability to extract generous donations from successful graduates, a student who makes promises in their application to become a doctor or lawyer will have a greater chance of entrance. It will pay to show how earning your degree from the university of your choice will allow you financial success in life.

While perhaps unfair, power equals money, or the access to money, in American society. A student who was student body president in high school and makes clear on their application essay that they will make a career out of elected public office will see their odds increase. What university would not be proud to say that a dedicated public servant is a graduate of their institution? The same is true if an applicant is able to get a recommendation from a Senator or Representative, possibly by doing campaign volunteer work for them around election time. With higher education a billion plus dollar a year business, colleges know they have to have the support of elected officials who owe them favors.

Finally understand that no matter how interesting of a person you are, college admissions is a numbers game to be played similar to any other game of chance. While things can be done to tilt the odds in your favor, you cannot take things personally. Be prepared for rejection not just on an emotional level, but a practical one as well by applying to multiple colleges.

After graduating with a degree in Communication Studies from San Jose State University, Bryce has worked in sales and marketing. With nearly a decade of business development expertise under his belt in the education industry, he now operates AcceptanceRate.com to help future students get reliable data in the palm of their hands easily and effectively.

5 Ways to Improve Your GPA for College Admissions

4 Careers for Those Passionate About Mental Health

Mental health has become a hot topic, especially amid the COVID-19 pandemic. As a result,…

Managing Your Social Media During The College Admissions Process

Career Spotlight: Considerations for Pursuing a Career in Health

Career Spotlight: Is Public Health the Degree for You?

When you sit down to start applying for colleges, the process can seem overwhelming. As…

The Role of Data in College Admissions

In our modern world, where data about what we do is more abundant than ever…

A staple of all large cities and almost all counties in the United States, the…

College sports are a big business, bringing in over a billion dollars per year for…

Search admissions and acceptance rate information on over 1,500 colleges and universities in the U.S.